Today we bested the hats!!

I’ve been putting it off for a while now, always finding other, more important things to work on. But in the back of my head, there they always were: the damned hats. To explain this I have to say that I’m a complete noob when it comes to 3D programming. I’m rather a noob when it comes to programming period. As some of you might know I started coding a couple of years ago when I made the first version of Matchmaker. Which was only a boardgamy version at the time (and never finished at that) as we had the plan to make it into a board game and to tweak stuff with the computer version would have come in handy.

Having worked on a couple of different games now I feel sufficiently well versed in the art of game development, but of course all of them were 2D games as flash has not had the capacities for more. Until now.

Which in a way is neat, because now people like me who are not really graphics programming geniuses can do awesome stuff nonetheless. But this also means that there are not a lot of resources out there to get started with 3D in flash. No tutorials, no books, the 3D engine still in beta, almost no people asking stuff in forums and getting answers. So learning happens the hard way – and by postponing stuff that I’m too anxious to tackle.

Like hats. Hats should not be a problem, one should think, you just load them and then you put them on people. As it turns out – they work exactly as simple as that. But to figure this out we had to spent the better part of this day, having nothing but an obscure forums post to go on, where someone does some incredible stuff with sub meshes and animations which I simply have no way of comprehending yet. No documentation on Away3D’s part whatsoever. (Not that I blame them. They surely work as hard as anyone to get the engine to release version.) Add to that mix a crappy, no longer supported exporter for Davids 3D modeling software and too many different versions of hats, animations and character meshes to count and then desperately trying to put all of this together in different combinations of womanOld1WithHat.mesh with womanNew2WithoutHat.anim and hatWithoutWoman.mesh and —you get the picture.

In hindsight I could have done that a lot sooner and spared me some anxiety. On the other hand, you never know before hand, if you are going to solve a problem. And had I not been able to I would have had to make a rather grim decision. Which one I do not know, but maybe we would not have had hats. Or not many different ones. And no hair pieces, no puff sleeves, no canes, no purses. And wouldn’t that have been sad. 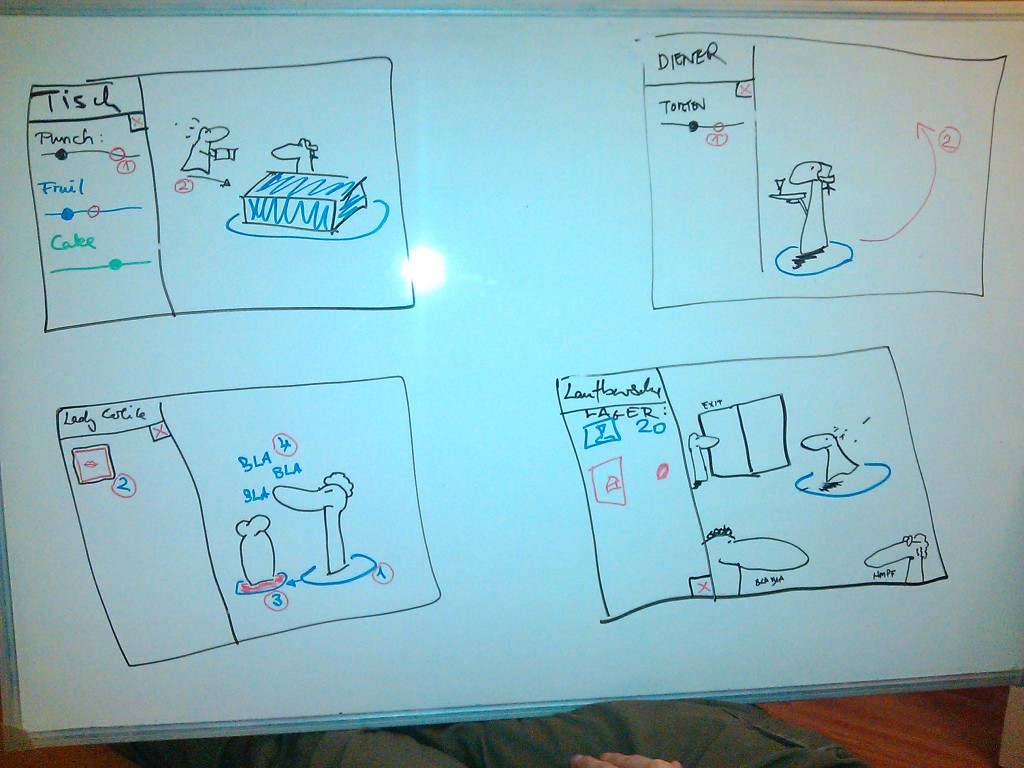 What other historical periods would you like to play in?

This thought of porting the game when finished to other periods of history has followed me for a while now. It would “just” be a task for graphic artists to update the visual parts and would be quite quick I think. Of course, it is not a priority at all at the moment. But now and then I enjoy myself by imagining which periods I’d love to do first.

So which one would you love to play in?

I just thought I’d quickly share this again in case someone hasn’t seen it yet:

We made it to our new blog!

So we finally managed to switch to this new blog. It was not quite as fast and easy as anticipated but well worth the effort. Updates should now be a breeze and, no way, actually be fun! (What does this teach me? – Self programmed is good, especially to learn new stuff, but specializing and using other people’s contribution where my own skills are lacking is way more effective!)